Russians Not Forced to Detour during 9/21 Earthquake 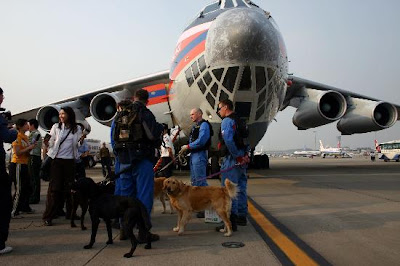 Russian Search and Rescue Team on a Mission in 2008

China Desk: During the 9/21 Earthquake of 1999, Taiwan independence propagandists disseminated a Big Lie. They alleged that Russian rescue workers were forced to detour around mainland Chinese airspace, delaying their arrival on Taiwan, possibly costing human lives. This allegation was a flagrant lie.

Below is a letter from Julian Clegg to the Taipei Times refuting this urban legend, which stubbornly persists even though it was discredited a decade ago.

The Moscow correspondent for the China Times who refuted this urban legend, was Arkady Borisov. His name in Chinese is 包理述 (Bao Lishu).

The Chief Coordinator of the Russian Emergency Assistance Team (Emercom) when the 9/21 Earthquake struck, was Vladimir Boreiko. His name is also Latinised as Boreyko and is given in the China Times article as 博雷科 (Boleike).

Media Myth Lives On:
Russians Not Forced to Detour during 9/21 Earthquake
by Julian Clegg, Taipei
September 18, 2009

Monday marks the 10th anniversary of the 921 Earthquake of 1999. Members of rescue teams who came to Taiwan’s aid after the quake have been invited to attend a series of commemorative events this week.

On Sept. 25, 1999, four days after the earthquake, the Taipei Times ran an article entitled “Taipei accuses China of exploiting quake.” The newspaper followed the government and Chinese-language media in reporting “a Russian earthquake relief mission en route to Taiwan was forced to make a lengthy detour over Siberia because [mainland] China refused to allow the Russian plane carrying the team to pass through its airspace.”

On April 1 this year, the Taipei Times reported that “a group of Russian search and rescue workers that helped local teams during the 921 Earthquake in 1999 will come to Taiwan this September to take part in an event commemorating the 10th anniversary of the quake ... At the time, Russia dispatched a group of 83 professional search-and-rescue personnel to help in the search for survivors. Because of [mainland] China’s refusal to allow Russian planes to fly through its airspace, the help was delayed for 12 hours.”

I must point out that this accusation, though widely believed by people in Taiwan, is untrue.

When the accusation first appeared in the media, I felt doubtful for three reasons. First, different media disagreed widely about the length of the delay. Second, according to my understanding of relations between Russia, [mainland] China and Taiwan, I thought it unlikely that [mainland] China would refuse such a request. Third, the source of the report was said to be a Russian-language newspaper Segodnya (Today). I found this odd because it is very rare for Taiwanese media to report stories from the Russian media, especially when the original article is in Russian.

Out of curiosity, I visited the Russian trade office on Xinyi Road to ask whether the reports were true. The Russian trade representative and other staff said they had not heard of it.

The Russian representative said: “Not everything you read in the newspapers is always true.”

He explained that he had played a key role in facilitating the rescue mission. He assured me that the Russian team had never requested to fly through [mainland] Chinese air space, since the quickest and most efficient way for them to come here was to follow their established domestic route from Moscow to the Russian Far East, and from there across the sea to Taiwan.

He said the route from Russia to Taiwan was registered with international aviation authorities, although it was not in commercial use. It had only been used once before, for a private flight to Taiwan by Russian politician Vladimir Zhirinovsky (who visited Taiwan from Oct. 18 to Oct. 22, 1998.)

Following those reports in 1999, however, Taiwanese politicians, including then foreign minister Jason Hu (胡志強) and then Taoyuan County commissioner Annette Lu (呂秀蓮), publicly condemned [mainland] China for its supposed callousness in delaying the Russian rescue mission,.

The incident was cited as a pretext for refusing material aid, such as tents, prefabricated houses and so on, from [mainland] China, and turning down Beijing’s offer to send a medical team, although a cash donation from [mainland] China was accepted. Incidentally, Taiwan also refused aid offered by the Philippines.

After leaving the Russian trade office, I told what I had heard to Time magazine’s Taiwan correspondent Donald Shapiro, and called in to Li Ao’s (李敖) television call-in program and another call-in program on radio.

On Oct. 1, 1999, Taiwan’s representative office in Moscow invited members of the rescue team, who had just returned to Russia, to dinner.

Arkady Borisov, Moscow correspondent of the China Times, asked the rescue team whether it was true that they had been refused passage through [mainland] Chinese airspace. Team leader Vladimir Boreiko replied that it was not true, and proceeded to give the same account that the Russian representative in Taipei gave to me. This report appeared in the China Times on Oct. 3, 1999, and is still available online.

These are the facts of the matter as far as I know. Anyone who is still in doubt will have a chance to ask the Russian rescue team members during their visit to Taiwan this week.

China Desk: below is the China Times article mentioned in Julian Clegg's letter. This China Times article, submitted by Russian reporter Arkady Borisov, refuted this Taiwan independence Big Lie back in 1999, less than two weeks after the quake struck.

俄國救難隊隊長普拉特先生說，台灣官方已請求俄羅斯專家協助訓練中華搜救隊隊員，並已獲得緊急事務部長紹伊古的同意。
Posted by Bevin Chu at 7:54 AM 4 comments: Links to this post