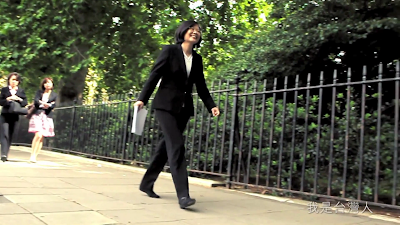 Soundtrack:
Cue cover of Iz Kamakawiwoʻole's rendition of "Over the Rainbow"

Tsai Ing-wen (v.o.)
一九八零年代 / During the 1980s
我是在倫敦經濟學院 / I was at the London School of Economics
我的老師 / My teacher
不斷的啟發我們 / endlessly inspired us
社會中有中一條理性的道路 / Society has a rational path
有一個扛起責任的政府 / a government that bears responsibility
打造一個均富永續的國家 / that forges an equitable and enduring nation
台灣要走向世界 / Taiwan must walk toward the world
我是台灣人 / I am Taiwanese
我是蔡英文 / I am Tsai Ing-wen

Tsai Ing-wen, DPP candidate for Republic of China President in 2012, has played the "Taiwanese Identity" card.

Watch this slickly made campaign commercial, commissioned by Tsai Ing-wen's campaign committee. But don't be fooled. The  impeccably professional production values, replete with a cover of Iz Kamakawiwoʻole's rendition of "Over the Rainbow," mask deeply repugnant psychological attitudes.

Tsai's concluding remarks in the commercial are: "I am Taiwanese, I am Tsai Ing-wen."

Many native English speakers unfamiliar with politics on Taiwan, especially those living in the US, may not fully appreciate what Tsai is getting at. They may have difficulty discerning her subtext. They may find it hard to read between the lines.

To better understand what Tsai Ing-wen is really saying, imagine the same commercial in the US, run by white supremacist David Duke, running against a Barack Obama type "outsider," someone cast as "not one of us." Imagine Duke concluding with: "I am American, I am David Duke."

No one would have the slightest difficulty understanding what Duke was getting at. Everyone would know Duke was implying that his opponent was "not an American, not a white American."

And so it is with Tsai Ing-wen, the DPP, and the Taiwan independence movement. They remain motivated, today in 2011, as they have been for the past four decades, by atavistic identity politics and petty ethnic hatred.

The more rabidly fundamentalist supporters of Tsai Ing-wen, the DPP, and the Taiwan independence movement are unguarded in their speech. They scream about how "Taiwanese bulls" will exterminate "Chinese pigs," at the top of their lungs.

The sad fact is, DPP leaders and the Taiwan independence movement are motivated at their psychological and emotional core, not by any longing for "democracy, freedom, and human rights," but by their compulsion to craft a "Taiwanese ethnic and national identity."

As Sisy Chen, former DPP Public Relations Director noted, "The DPP is the KKK of Taiwan." As Cheng Li-wen, former DPP National Assembly Member noted, "I never wanted to believe that the DPP was racist, but it is."

Make no mistake. The KMT was indeed at one time guilty of gross abuses. These abuses were committed by a government against its own citizens.

Why do they engage in this flagrant misrepresentation of the facts?

Because they need a rationale for their ethnic identity based project of nation building, for the creation of a Hoklo Chauvinist themed "Republic of Taiwan," and have no qualms about lying to achieve that goal.

In 2004 for example, a delegation of ministers from the Presbyterian Church in Taiwan, a long time abettor of Taiwan independence, paid an emergency visit to DPP elder Shen Fu-hsiung. Shen was under pressure to spill the beans, and testify that First Lady Wu Shu-cheng had accepted huge cash bribes from a prominent businessman.

What textual truth did these devout Christians share with him? They solemnly assured Shen that it was not a sin to lie as long as it was in a good cause. In other words, "Thou shalt not bear false witness against thy neighbor, unless of course it advances Taiwan independence."

Tsai Ing-wen has marketed herself as a reformer whose mission it is to upgrade the DPP. Sad to say, she has done no such thing. Instead, the DPP has downgraded Tsai Ing-wen, bringing her down to its level.

Assuming of course that Tsai Ing-wen was not already at their level from the beginning.

The following is a recent UDN News editorial on Tsai Ing-wen's "I am Taiwanese, I am Tsai Ing-wen" campaign commercial.

Just exactly what is Ma Ying-jeou? According to Green Camp political logic, Ma Ying-jeou is a "mainlander." By implication, Ma Ying-jeou is "Chinese." By further implication, he is a "Chi-Com fellow traveler." Context reveals meaning. Ma Ying-jeou, by implication, is "not Taiwanese." In fact, Tsai's declaration is merely a sanitized version of "Chinese pigs, get the hell back to China." According to Green Camp logic, Ma Ying-jeou stands for a "foreign regime," for "eventual reunification," and for "pandering to [Mainland] China and selling out Taiwan." Therefore Ma Ying-jeou is "not Taiwanese," By implication he is "Chinese," just like "those people" on the other side of the Taiwan Strait. Therefore Green Camp political rhetoric often equates the China Nationalist Party with the Chinese Communist Party. Lashing out at the Kuomintang means lashing out at the Chinese Communists. Sometimes it even equates the Republic of China with the Peoples Republic of China. Opposition to the ROC is hence equated with opposition to the PRC.

The Republic of China government has scant wherewithal currently to represent China as a whole. This is primarily the fault of Beijing. Few people on Taiwan identify themselves as "Chinese." This too is primarily the fault of Beijing. Therefore when Taiwan independence advocates incite "ethnic struggles," they spin them as showdowns between "Taiwanese" on the one side, and "Chinese" on the other. On Taiwan, being labeled "Chinese" is now the equivalent of being a "Chinese" person from the other side of the Taiwan Strait. The term "Taiwanese" is no longer merely an antonym for "Mainlander." That merely invokes the issue of "ethnicity," or more accurately, provincial origin. Today the term "Taiwanese" has been transformed into an antonym for "Chinese." That invokes the issue of "national identity." According to the self-styled "Taiwanese" in today's Democratic Progressive Party, the Republic of China is a "foreign regime." Ma Ying-jeou is a "Territorial Governor," and supporters of the Republic of China are "Chinese." By implication, opposition to Taiwan independence is opposition to Taiwan. Opposition to Taiwan independence is "lack of love for Taiwan." Opposition to Taiwan independence is proof positive that one is "not Taiwanese." This is the clear and unambiguous subtext behind Tsai Ing-wen's declaration, "I am Taiwanese,"

Three years ago, Tsai Ing-wen became Democratic Progressive Party Chairman. She clearly hoped to shrug off this albatrosss around her neck. In March 2009, she issued a manifesto entitled, "Defend Taiwan with a New Concept of Nativism." She said "Some people have unintentionally [sic] defined Nativism far too narrowly. They have invested it with a specific meaning. Their narrow definition of Nativism is at odds with our need to unite for our collective survival." What does Tsai Ing-wen plan to do with her "I am Taiwanese" TV spot, which intentionally defines Nativism ar too narrowly.

蔡英文未說出「我是台獨，我是蔡英文」的潛台詞，連偷偷小聲說出也沒有。民進黨，何必還要搬弄「鬧台獨，卻不敢台獨」？
Posted by Bevin Chu at 9:51 AM 8 comments: Links to this post