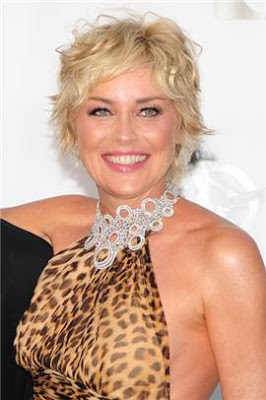 Heart of Stone? The China Desk likes Sharon Stone, and certainly hopes not

Sharon Stone made a not so smart statement while on the red carpet in Cannes. She was asked if she had heard about the disaster that hit China recently, and her answer was:

"Of course I have. Well you know at first I thought I'm not happy with the way the Chinese are treating the Tibetans….and I've been concerned with should we have the Olympics because they're not being nice to the Dalai Lama who's a good friend of mine. And then all this earthquake and stuff happened and I thought, 'Is that Karma, when you're not nice and the bad things happen to you?'"

Well that's one way of looking at things, Sharon. Although, we don't think most people agree with that way of thinking. She tried redeeming her comment afterwards but you can't take what you said back. 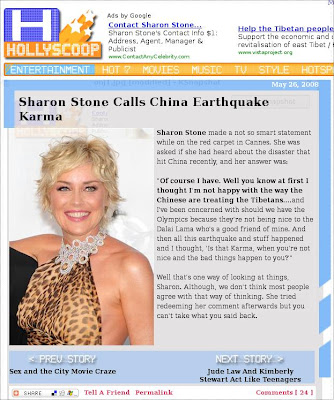 The China Desk responds: Sichuan Province is just to the east of the Tibet Autonomous Region. Many Tibetan-Chinese live in western Sichuan, in what Tibetan independence advocates claim is "part of Greater Tibet."

With the number of dead approaching 100,000, a not insignificant number of quake victims were Tibetan-Chinese. If the May 12 Wenchuan Earthquake was "karmic payback" against "Chinese," which Ms. Stone erroneously equates with "Han-Chinese," how does Ms. Stone explain all the dead and injured Tibetan-Chinese?

Applying Ms. Stone's logic, should we conclude that Tibetan-Chinese who died in the earthquake were victims of "karmic payback" for the egregious sins of the Tibetan independence movement?

Some Tibetan-Chinese don't admit to being Chinese. Instead, they demand a Tibetan variant of South Africa's former system of Apartheid. They demand political independence from a polyglot, multi-ethnic China, on the basis of their "Tibetan" ethnic identity.

Not only do they demand political independence, they demand that other regions of China to which Tibetan-Chinese have migrated be incorporated into their "Greater Tibet."

In case you think I'm kidding, take a gander at the "Greater Tibet" territorial claims made by Tibetan independence ultranationalists below. 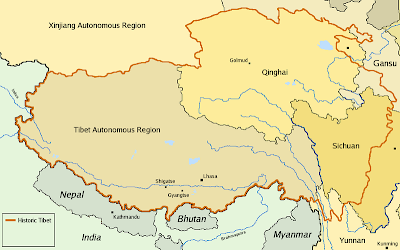 According to Tibetan independence advocates, anywhere ethnic Tibetans live ought to be part of "Greater Tibet."

I guess Oberscharfuhrer Heinrich Harrer of the SS really did a thorough job of inculcating his young charge Tenzing Gyatso with Nazi concepts of race and territoriality after all.

Here's what Wikipedia has to say about Harrer and his young disciple:

Heinrich Harrer's Nazi past was unknown until a 1997 article [appeared] in the German magazine Stern. Harrer became a member of the Sturmabteilung (SA, or "Brownshirts") in October 1933, when the Nazi Party (NSDAP) was illegal in Austria. He held the rank of Oberscharführer (Sergeant). In March 1938, Austria was annexed by the German regime, as a part of Grossdeutschland ("Greater Germany"). Harrer joined the Schutzstaffel (SS, or "Blackshirts") that same year and was photographed with Adolf Hitler.

Harrer became a friend of the young Dalai Lama Tenzin Gyatso, who had summoned him to the Potala Palace after having seen him repeatedly in the streets below the palace through his telescope. Harrer taught the Dalai Lama (who was eleven years old when they met) much about the outside world and effectively served as his tutor. The Dalai Lama has often credited Harrer's later writings about Tibet as having helped focus international attention on the plight of the Tibetan people after Communist Chinese control.

Okay, I'll cop to it. Sharon Stone is one of my favorite actresses, and to paraphrase Jimmy Carter, I have lusted after her in my heart.

Ms. Stone is both beautiful and intelligent. But the Myth of Shangri-la and Tibetan Independence Political Correctness have her so brainwashed, she is no longer capable of thinking for herself.

Isn't it time Western camp followers of "The Dalai Lama" (shades of "The Donald") ran some long overdue reality checks on their borrowed "spiritual faith?"

A friend in the San Franciso Bay Area had this to say:

The epicenter of the 8.0 Ms Sichuan earthquake was in the Aba Tibetan and Qiang Autonomous Prefecture, where the ethnic Tibetan population is 53.72%. Videos and criticisms of her comments quickly spread across the web.

I also checked the distribution of ethnic minorities maps in National Geographic magazine's special edition on China and my own book, and confirmed that the area is indeed inhabited by Tibetans. So my response to Sharon Stone is, if God intended this as karma against the Hans, then:

1. God would have put the earthquake somewhere else, somewhere inhabited primarily by Hans, like Shanghai, Beijing, or the Dongbei;

2. God would have struck down only Hans and Qian minorities, and left all Tibetans standing.

I think China should publish the number of ethnic Tibetans killed. It would be something like 10,000 or more, and show some of the casualties (I saw a Tibetan village on TV, and many of the buildings featured had the distinctive Tibetan designs and Burgundy red color paint of the Tibetans) in Tibetan clothes clutching prayer beads, just to silence the low IQ Sharon Stone, even though they say she has high IQ in reality.

Again, I am acting only as a neutral but scientific person, not because I am pro-CCP OK? I am pro-truth and common sense. 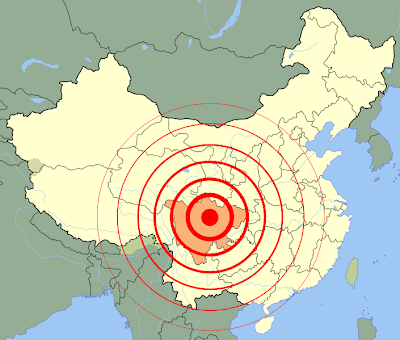 Epicenter of Sichuan Earthquake. The Tibet Autonomous Region borders on Sichuan. Tibetan-Chinese in Sichuan and the Tibet Autonomous Region figured significantly among the dead and injured (Note the ubiquity of Taiwan independence influences? Whoever made this map made Taiwan slightly darker than the Chinese mainland. Because it wasn't quite as dark as Russia, Korea, Vietnam and other neighboring nations, even I didn't catch it! Fortunately a fellow reunificationist noticed it and brought it to my attention.)